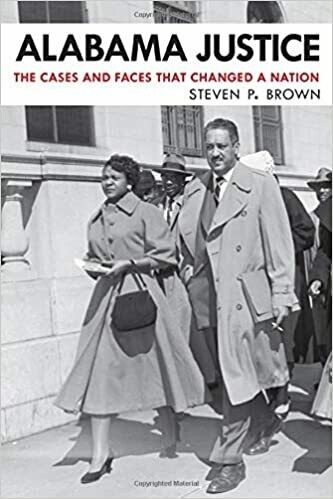 Alabama Justice: The Cases and Faces That Changed a Nation by Steven P. Brown

Unknown to many, Alabama has played a remarkable role in a number of Supreme Court rulings that continue to touch the lives of every American. In Alabama Justice: The Cases and Faces That Changed a Nation, Steven P. Brown has identified eight landmark cases that deal with religion, voting rights, libel, gender discrimination, and other issues, all originating from legal disputes in Alabama.

Written in a concise and accessible manner, each case law chapter begins with the circumstances that created the dispute. Brown then provides historical and constitutional background for the issue followed by a review of the path of litigation. Excerpts from the Court’s ruling in the case are also presented, along with a brief account of the aftermath and significance of the decision. The First Amendment (New York Times v. Sullivan), racial redistricting (Gomillion v. Lightfoot), the Equal Protection Clause of the Fourteenth Amendment (Frontiero v. Richardson), and prayer in public schools (Wallace v. Jaffree) are among the pivotal issues stamped indelibly by disputes with their origins in Alabama legal, political, and cultural landscapes. By examining such landmark twentieth-century milestones and eras such as the Scottsboro Boys trial, the Civil Rights movement, and the fight for women’s rights through a legal lens, Brown sheds new and unexpected light on the ways that events in Alabama have shaped the nation.

In addition to his analysis of cases, Brown discusses the three associate Supreme Court justices from Alabama to the Supreme Court: John McKinley, John Archibald Campbell, and Hugo Black. Their cumulative influence on constitutional interpretation, the institution of the Court, and the day-to-day rights and liberties enjoyed by every American is impossible to measure. A closing chapter examines the careers and contributions of these three Alabamians.