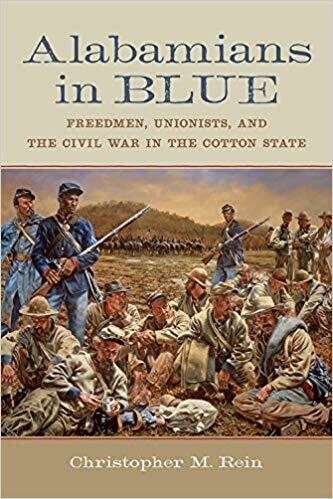 Alabamians in Blue offers an in-depth scholarly examination of Alabama’s black and white Union soldiers and their contributions to the eventual success of the Union army in the western theater. Christopher M. Rein contends that the state’s anti-Confederate residents tendered an important service to the North, primarily by collecting intelligence and protecting logistical infrastructure. He highlights an underappreciated period of biracial cooperation, underwritten by massive support from the federal government. Providing a broad synthesis, Rein’s study demonstrates that southern dissenters were not passive victims but rather active participants in their own liberation.

Ecological factors, including agricultural collapse under levies from both armies, may have provided the initial impetus for Union enlistment. Federal pillaging inflicted further heavy destruction on plantation agriculture. The breakdown in basic subsistence that ensued pushed Alabama’s freedmen and Unionists into federal camps in garrison cities in search of relief and the opportunity for revenge. Once in uniform, Alabama’s Union soldiers served alongside northern regiments and frustrated Confederate General Nathan Bedford Forrest’s attempts to interrupt the Union supply efforts in the 1864 Atlanta campaign, which led to the collapse of Confederate arms in the western theater and the eventual Union victory. Rein describes a “hybrid warfare” of simultaneous conventional and guerilla battles, where each significantly influenced the other. He concludes that the conventional conflict both prompted and eventually ended the internecine warfare that largely marked the state’s experience of the war.
A comprehensive analysis of military, social, and environmental history, Alabamians in Blue uncovers a past of biracial cooperation in the American South, and in Alabama in particular, that postwar adherents to the “Myth of the Lost Cause” have successfully suppressed until now.

25% off Cyber Monday  Sale!!
Discount will be applied at checkout!