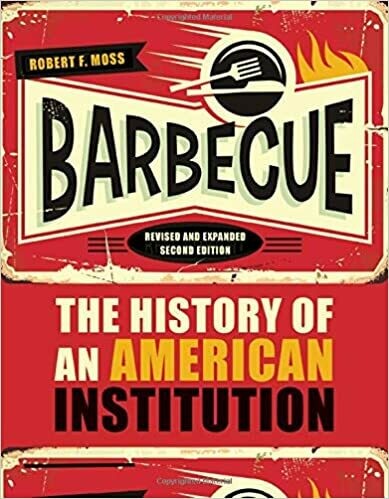 Barbeque: The History Of An American Institution by Robert F. Moss

The full story of barbecue in the United States had been virtually untold before Robert F. Moss revealed its long, rich history in his 2010 book Barbecue: The History of an American Institution. Moss researched hundreds of sources—newspapers, letters, journals, diaries, and travel narratives—to document the evolution of barbecue from its origins among Native Americans to its present status as an icon of American culture. He mapped out the development of the rich array of regional barbecue styles, chronicled the rise of barbecue restaurants, and profiled the famed pitmasters who made the tradition what it is today.

Barbecue is the story not just of a dish but also of a social institution that helped shape many regional cultures of the United States. The history begins with British colonists’ adoption of barbecuing techniques from Native Americans in the 17th and 18th centuries, moves to barbecue’s establishment as the preeminent form of public celebration in the 19th century, and is carried through to barbecue’s ubiquitous standing today.

From the very beginning, barbecues were powerful social magnets, drawing together people from a wide range of classes and geographic backgrounds. Barbecue played a key role in three centuries of American history, both reflecting and influencing the direction of an evolving society. By tracing the story of barbecue from its origins to today, Barbecue: The History of an American Institution traces the very thread of American social history.