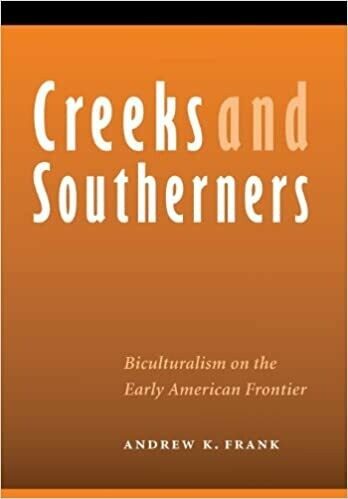 Creeks and Southerners examines the families created by the hundreds of intermarriages between Creek Indian women and European American men in the southeastern United States during the eighteenth and early nineteenth centuries. Called “Indian countrymen” at the time, these intermarried white men moved into their wives’ villages in what is now Florida, Georgia, and Alabama. By doing so, they obtained new homes, familial obligations, occupations, and identities. At the same time, however, they maintained many of their ties to white American society and as a result entered the historical record in large numbers.

Creeks and Southerners studies the ways in which many children of these relationships lived both as Creek Indians and white Southerners. By carefully altering their physical appearances, choosing appropriate clothing, learning multiple languages, embracing maternal and paternal kinsmen and kinswomen, and balancing their loyalties, the children of intermarriages found ways to bridge what seemed to be an unbridgeable divide. Many became prominent Creek political leaders and warriors, played central roles in the lucrative deerskin trade, built inns and taverns to cater to the needs of European American travelers, frequently moved between colonial American and Native communities, and served both European American and Creek officials as interpreters, assistants, and travel escorts. The fortunes of these bicultural children reflect the changing nature of Creek-white relations, which became less flexible and increasingly contentious throughout the nineteenth century as both Creeks and Americans accepted a more rigid biological concept of race, forcing their bicultural children to choose between identities.
Save this product for later
Display prices in: USD
bottom of page