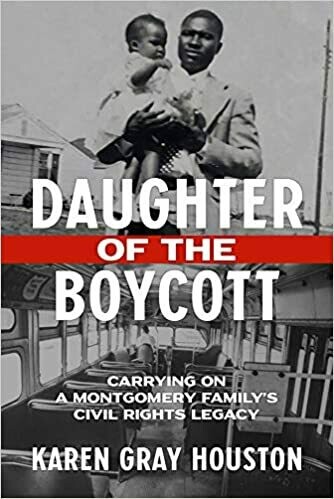 Daughter of the Boycott: Carrying On a Montgomery Family's Civil Rights Legacy by Karen Gray Houston

In 1950, before Montgomery, Alabama, knew Martin Luther King Jr., before Rosa Parks refused to surrender her seat to a white passenger, before the city’s famous bus boycott, a Negro man named Hilliard Brooks was shot and killed by a white police officer in a confrontation after he tried to board a city bus. Thomas Gray, who had played football with Hilliard when they were kids, was outraged by the unjustifiable shooting. Gray protested, eventually staging a major downtown march to register voters, and standing up to police brutality.

Five years later, he led another protest, this time against unjust treatment on the city’s segregated buses. On the front lines of what became the Montgomery
bus boycott, Gray withstood threats and bombings alongside his brother, Fred D. Gray, the young lawyer who represented Martin Luther King Jr., Rosa Parks, and the rarely mentioned Claudette Colvin, a plaintiff in the case that forced Alabama to desegregate its buses.

An incredible story of family in the pivotal years of the civil rights movement, Daughter of the Boycott is the reflection of Thomas Gray’s daughter, award-winning
broadcast journalist Karen Gray Houston, on how her father’s and uncle’s selfless actions changed the nation’s racial climate and opened doors for her and countless other African Americans.