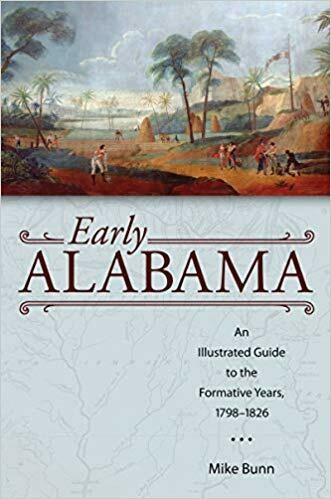 Alabama’s territorial and early statehood years represent a crucial formative period in its past, a time in which the state both literally and figuratively took shape. The story of the remarkable changes that occurred within Alabama as it transitioned from frontier territory to a vital part of the American union in less than a quarter century is one of the most compelling in the state’s past. This history is rich with stories of charismatic leaders, rugged frontiersmen, a dramatic and pivotal war that shaped the state’s trajectory, raging political intrigue, and pervasive sectional rivalry.

Many of Alabama’s modern cities, counties, and religious, educational, and governmental institutions first took shape within this time period. It also gave way to the creation of sophisticated trade and communication networks, the first large-scale cultivation of cotton, and the advent of the steamboat. Contained within this story of growth and innovation is a parallel story, the dispossession of Native groups of their lands and the forced labor of slaves, which fueled much of Alabama’s early development.

Early Alabama: An Illustrated Guide to the Formative Years, 1798–1826 serves as a traveler’s guidebook with a fast-paced narrative that traces Alabama’s developmental years. Despite the great significance of this era in the state’s overall growth, these years are perhaps the least understood in all of the state’s history and have received relatively scant attention from historians. Mike Bunn has created a detailed guide—appealing to historians and the general public—for touring historic sites and structures including selected homes, churches, businesses, government buildings, battlefields, cemeteries, and museums..