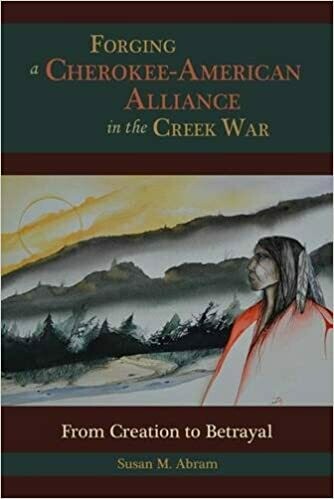 Forging A Cherokee-American Alliance In The Creek War by Susan M. Abram

The Creek War of 1813–1814 is studied primarily as an event that impacted its two main antagonists, the defending Creeks in what is now the State of Alabama and the expanding young American republic. Scant attention has been paid to how the United States’ Cherokee allies contributed to the war and how the war transformed their society. In Forging a Cherokee-American Alliance in the Creek War, Susan M. Abram explains in engrossing detail the pivotal changes within Cherokee society triggered by the war that ultimately ended with the Cherokees’ forced removal by the United States in 1838.

The Creek War (also known as the Red Stick War) is generally seen as a local manifestation of the global War of 1812 and a bright footnote of military glory in the dazzling rise of Andrew Jackson. Jackson’s victory, which seems destined only in historic hindsight, was greatly aided by Cherokee fighters. Yet history has both marginalized Cherokee contributions to that conflict and overlooked the fascinating ways Cherokee society changed as it strove to accommodate, rationalize, and benefit from an alliance with the expanding American republic. Through the prism of the Creek War and evolving definitions of masculinity and community within Cherokee society, Abram delineates as has never been done before the critical transitional decades prior to the Trail of Tears.

Deeply insightful, Abram illuminates the ad hoc process of cultural, political, and sometimes spiritual transitions that took place among the Cherokees. Before the onset of hostilities, the Cherokees already faced numerous threats and divisive internal frictions. Abram concisely records the Cherokee strategies for meeting these challenges, describing how, for example, they accepted a centralized National Council and replaced the tradition of conflict-resolution through blood law with a network of “lighthorse regulators.” And while many aspects of masculine war culture remained, it too was filtered and reinterpreted through contact with the legalistic and structured American military.

Rigorously documented and persuasively argued, Abram’s award-winning Forging a Cherokee-American Alliance in the Creek War fills a critical gap in the history of the early American republic, the War of 1812, the Cherokee people, and the South.