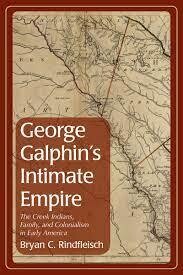 A native of Ireland, George Galphin arrived in South Carolina in 1737 and quickly emerged as one of the most proficient deerskin traders in the South. This was due in large part to his marriage to Metawney, a Creek Indian woman from the town of Coweta, who incorporated Galphin into her family and clan, allowing him to establish one of the most profitable merchant companies in North America.