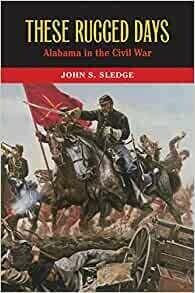 These Rugged Days: Alabama in the Civil War by John S. Sledge

The Civil War has left indelible marks on Alabama’s land, culture, economy, and people. Despite its lasting influence, this wrenching story has been too long neglected by historians preoccupied by events elsewhere. In These Rugged Days: Alabama in the Civil War, John S. Sledge provides a long overdue and riveting narrative of Alabama’s wartime saga.

Focused on the conflict’s turning points within the state’s borders, this book charts residents’ experiences from secession’s heady early days to its tumultuous end, when 75,000 blue-coated soldiers were on the move statewide. Sledge details this eventful history using an impressive array of primary and secondary materials, including official records, diaries, newspapers, memoirs, correspondence, sketches, and photographs. He also highlights such colorful personalities as Nathan Bedford Forrest, the “Wizard of the Saddle”; John Pelham, the youthful Jacksonville artillerist who was shipped home in an iron casket with a glass faceplate; Gus Askew, a nine-year-old Barbour County slave who vividly recalled the day the Yankees marched in; and Augusta Jane Evans, the young novelist who was given a gold pen by a daring blockade runner.

Sledge offers a refreshing take on Alabama’s contributions to the Civil War that will intrigue anyone who is interested in learning more about the state’s war efforts. His narrative is a dramatic account that will be enjoyed by lay readers as well as students and scholars of Alabama and the Civil War. These Rugged Days is an enthralling tale of action, courage, pride, and tragedy, making clear the relevance of many of the Civil War’s decisive moments for the way Alabamians live today.