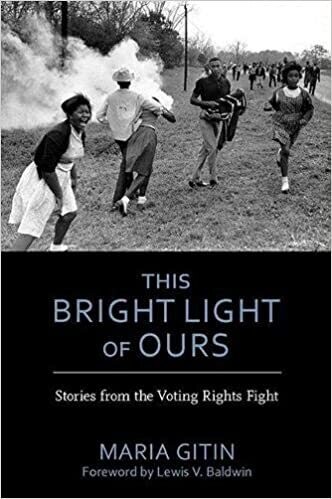 This Bright Light of Ours, Gitin

This Bright Light of Ours offers a tightly focused insider’s view of the community-based activism that was the heart of the civil rights movement. A celebration of grassroots heroes, this book details through first-person accounts the contributions of ordinary people who formed the nonviolent army that won the fight for voting rights.

Combining memoir and oral history, Maria Gitin fills a vital gap in civil rights history by focusing on the neglected Freedom Summer of 1965 when hundreds of college students joined forces with local black leaders to register thousands of new black voters in the rural South. Gitin was an idealistic nineteen-year-old college freshman from a small farming community north of San Francisco who felt called to action when she saw televised images of brutal attacks on peaceful demonstrators during Bloody Sunday, in Selma, Alabama.

Atypical among white civil rights volunteers, Gitin came from a rural low-income family. She raised funds to attend an intensive orientation in Atlanta featuring now-legendary civil rights leaders. Her detailed letters include the first narrative account of this orientation and the only in-depth field report from a teenage Summer Community Organization and Political Education (SCOPE) project participant.

Gitin details the dangerous life of civil rights activists in Wilcox County, Alabama, where she was assigned. She tells of threats and arrests, but also of forming deep friendships and of falling in love. More than four decades later, Gitin returned to Wilcox County to revisit the people and places that she could never forget and to discover their views of the “outside agitators” who had come to their community. Through conversational interviews with more than fifty Wilcox County residents and former civil rights workers, she has created a channel for the voices of these unheralded heroes who formed the backbone of the civil rights movement.