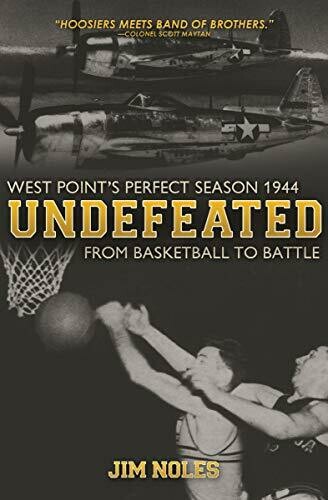 Undefeated: From Basketball to Battle by Jim Noles

As the new season opened in January of 1944, Kelleher’s strategy paid handsome dividends. By the end of January, West Point was 6–0; by the end of February, the team boasted a 13-0 record. Of course, during those weeks, it only took a glance at the newspaper headlines to be reminded that there were far bigger contests than intercollegiate basketball afoot in the winter of 1944. The world was at war. The US Army needed its finest on the front line more than on the court, and the three seniors were soon destined for other battles . . .

In the years that followed, the Army’s basketball team would never again have a chance to play in the NCAA tournament, and in the modern era, few remember West Point’s perfect 1944 season. Although West Point’s home basketball court is named the Edward C. Christl Arena, and the National Invitational Tournament’s trophy is named after his coach, Edward A. Kelleher, too few people fully appreciate why. But after reading Undefeated, they will.